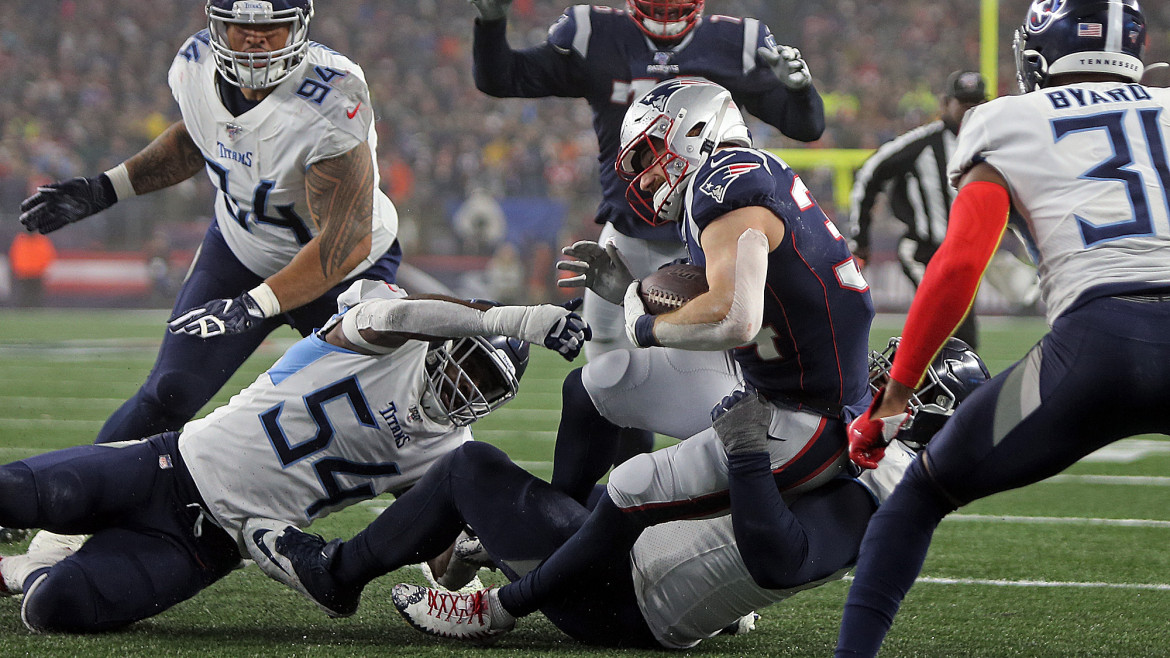 On his birthday, Titans running back Derrick Henry took the cake.

And the Titans blew out the candles on New England’s season.

The Titans pulled out a mammoth win over the Patriots on Saturday night, winning 20-13 on a night when Henry led the way.

Cornerback Logan Ryan intercepted Patriots quarterback Tom Brady and returned it for a touchdown with nine seconds for Tennessee.

The Titans will travel to face the Ravens next Saturday night at 7:15 CT in Baltimore.

It’s already been a memorable season for the Titans, who finished with their fourth consecutive winning season (9-7), marking their first time to do so in the “Titans era.”

With a 2-4 mark after Week 6, the Titans made a quarterback change, as Ryan Tannehill stepped in for Marcus Mariota. The Titans ended up going 7-3 in their final 10 games to reach the postseason, clinching a playoff spot for the second time in three seasons with a win at Houston last weekend.

Tannehill led the NFL with a 117.5 passer rating during a season when running back Derrick Henry captured the NFL’s rushing title with 1,540 yards, racking up 16 rushing touchdowns and six 100-yard games along the way, including a 211-yard performance last Sunday in Houston.

On Saturday night, the Titans came to town and knocked off the defending Super Bowl champions.

With fog swirling above Gillette Stadium, it was tight from the get-go.

The Titans took an early 7-3 lead on a 12-yard touchdown pass from quarterback Ryan Tannehill to tight end Anthony Firkser, which capped a 12-play, 75-yard drive. Running back Derrick Henry ran for 49 yards on seven carries on the team’s opening drive, providing a sign of things to come in the process.

The Patriots, who took an early 3-0 lead on a 36-yard field goal by kicker Nick Folk, regained the lead 10-7 on a five-yard rushing touchdown by receiver Julian Edelman.

The Titans were in danger of going into a double-digit deficit before halftime, but the defense got a big stop, holding the Patriots to another field goal after they had a first and goal at the Tennessee 1. Titans linebacker Rashaan Evans made a pair of stops near the goal-line, including one on a Sony Michel run on third down, and the Patriots led 13-7 with 2:16 left in the first half after another Folk field goal.

The Titans then reclaimed the lead at 14-13 with 35 seconds left in the first half on a one-yard touchdown run by Henry, which capped a seven-play, 75-yard drive.