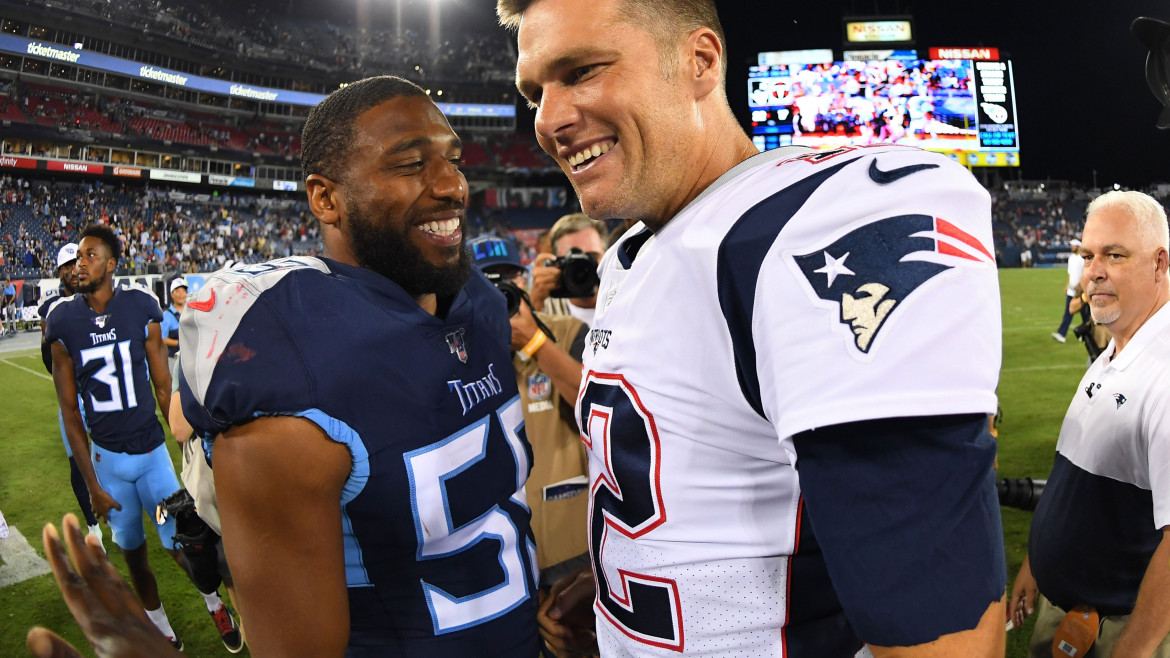 Six Things to Watch in Titans vs. Patriots on Saturday Night

Here’s a look at six things to watch…

Titans quarterback Ryan Tannehill has played in 100 regular season games during his career, but he hasn’t yet played in a playoff game. On Saturday night, that will change. Tannehill has proven to be a gamer since taking over at the starter in Week 7. He’s been solid under pressure, guiding comebacks, and he’s also been a tone-setter early in games. He has experience in his career against the Patriots, having faced them many times during his playing days in the AFC East with the Dolphins. He has four career wins against the Patriots, the most total wins by a starting quarterback vs. the Patriots from 2010-19. The stakes are higher now, and the Titans need Tannehill to keep it up.

Titans running back Derrick Henry finished as the NFL’s leading rusher with 1,540 rushing yards and 16 touchdowns. He posted six 100-yard games in 2019, including a 211-yard game against the Texans his last time out. All indications are his nagging hamstring is no longer slowing him down like it was last month. On Saturday, Henry and the Titans will face stiff opposition in the Patriots, who allowed just 95.5 yards per game on the ground this season, which was sixth best in the NFL. On what’s supposed to be a wet night, the Titans will need to run it effectively.

A.J. Brown has been a game-changer for the Titans. The rookie receiver finished the year with 1,051 receiving yards and eight touchdowns while posting five 100-yard games, and on many Sundays he provided sparks at key times. So how will the Patriots defend him? New England is known for taking key players out of games, and Brown certainly has the attention of Patriots coach Bill Belichick, who raved about the second-round pick on a conference call during the week. Patriots cornerback Stephon Gilmore is one of the best DBs in the game. The Patriots could elect to match Gilmore up against Brown, or perhaps the Patriots might double Brown and match Gilmore with receiver Corey Davis? The chess game will be interesting, and the attention paid to Brown and Davis should create opportunities for other Titans like receiver Tajae Sharpe and tight ends Jonnu Smith and Anthony Firkser to make plays.

The last time the Titans faced Tom Brady in the playoffs the Patriots quarterback picked him apart. Brady completed 35-of-53 passes for 337 yards and three touchdowns in New England’s 35-14 win back in January 2018, and the Titans didn’t sack him once. The last time the Titans faced Brady, however, during a regular season game in November 2018, it was much different. The Titans sacked Brady three times in that contest and were credited with seven quarterback hits. Brady completed just 21 of his 41 passes, and the Titans won the game 34-10. As defensive lineman Jurrell Casey said this week, the Titans need to make Brady uncomfortable from the first quarter to the fourth quarter. Pressure up the middle would be ideal.

Titans cornerback Adoree’ Jackson is set to return on Saturday night after missing the past five games with a foot injury. Jackson’s presence gives the team a valuable cover guy on a night when Brady will look to make plays to his receivers. When facing the Patriots, receiver Julian Edelman is the one to watch. Edelman caught 100 passes for 1,118 yards and six touchdowns on the season. He’s a tough guy to cover, but Titans cornerback Logan Ryan knows him well and, based on history, is expected to be among those with the assignment of slowing him down.

Patriots coach Bill Belichick has coached in 42 playoff games and has the most postseason wins (31) in NFL history. He has six Super Bowl victories. Brady has played in 40 playoff games, and New England’s roster is packed with players who have postseason experience. Meanwhile, it will be the first playoff games for Titans coach Mike Vrabel, Tannehill, and over half the team’s 53-man roster. When the game kicks off on Saturday, the Titans can’t let the moment be too big for them. Vrabel’s past – he won three Super Bowl rings with the Patriots as a player – has helped him prepare his team for what to expect. As midnight approaches on Saturday night, we’ll know how all this plays out.